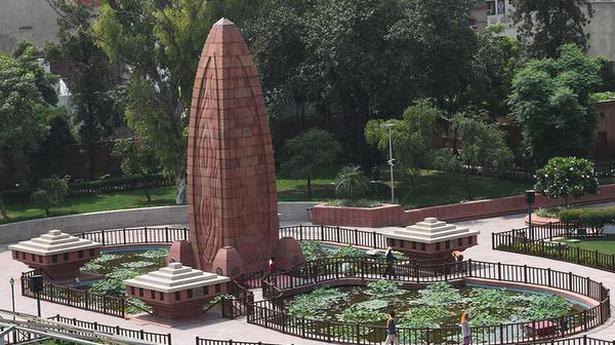 Reacting to criticism of the renovated Jallianwala Bagh by some historians, Culture Secretary Raghavendra Singh said on Thursday the “conservation was done under direct supervision of the Archaeological Survey of India” and that there was “nothing factually incorrect”.

Mr. Singh said the Ministry was in talks with the descendants of the martyrs of the Jallianwala Bagh massacre to share their memorabilia for display at the one of the galleries at the complex.

Prime Minister Narendra Modi had inaugurated four new galleries and the revamped Jallianwala Bagh on August 28 after the site was closed for renovations for about a year-and-a-half. The site of a massacre of Indians by British forces on April 13, 1919 in Amritsar, some historians said, had been turned into a place for enjoyment through the renovations.

According to sources, the project had been carried out by the ASI and the NBCC, which tendered out the work. The contract was given to Gujarat-based Vama Communications. In response to the critique that the space had been beautified, an official said landscaping had been done and it was not the same as beautification.

One of the criticisms of the project was the addition of glittering murals on the walls of the narrow corridor through which British forces entered and fired upon the peaceful gathering. Historian S. Irfan Habib had termed this feature a distortion of history and an attempt to glamourise.

The official said the murals had not been “mindlessly created” and that they depicted families happily entering the space where they were eventually killed. The official said the 31 descendants of the martyrs who attended the opening on August 28 had “no objections” that day.