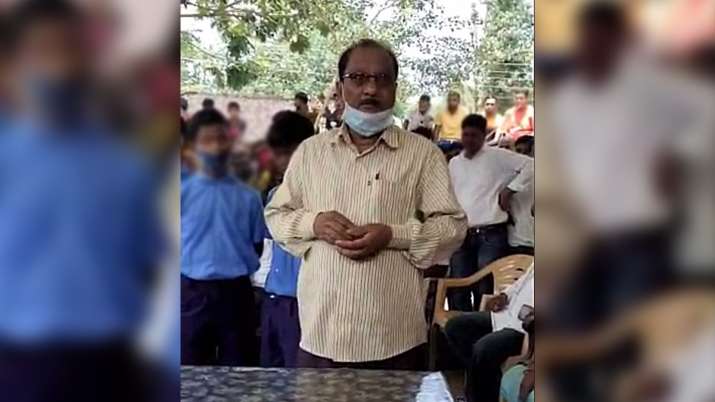 In an upsetting incident, a government school teacher in Chhattisgarh’s Kondagaon district thrashed a group of students of classes 7 and 8 for observing a fast on the festival of Janmashtami.

The teacher Charan Markam, is not only accused of beating up students but also made objectionable comments against a Hindu god. He has been suspended with immediate effect. Markam was posted at Government Middle School in Bundapara under Girola village panchayat.

A preliminary inquiry into a complaint against him has been ordered, Kondagaon Collector Pushpendra Kumar Meena said.

The village panchayat and local villagers had complained that Markam had allegedly thrashed some students of Classes 7 and 8 in the school on Tuesday for observing fast on Janmashtami and also made objectionable comments against Lord Krishna, he said.

The villagers had submitted audio and video evidence in support of their allegations, Meena said.

Subsequently, a government official was sent to conduct an inquiry and based on his report, the teacher was suspended with immediate effect, he said.

A report in this regard has been forwarded to police for further action the matter, the collector added.

The suspension order stated, “hurting religious sentiments and spreading hatred in the society comes under the category of serious misconduct.


Your (Markam) act is against the Chhattisgarh Civil Services (Conduct) Rules 1965.

Another official said, Janmashtami was celebrated on Monday and the next day when students reached school, Markam asked how many of them had observed fast and performed rituals during the festival.

Those students who raised their hands indicating affirmation were separated from others and were allegedly beaten up by him, he said.

According to the police, it has received a complaint and a report in connection with the incident and necessary action will be taken.

A separate police complaint, lodged by a tribal organization, alleged Markam was assaulted by local residents.

“We have received a report of the district administration and a complaint by local villagers against the teacher.

Besides, a counter complaint has been received from the Sarva Adivasi Samaj, an association of tribal communities, claiming the teacher was manhandled by locals,” a senior police official said and assured necessary action.

(With inputs from PTI)