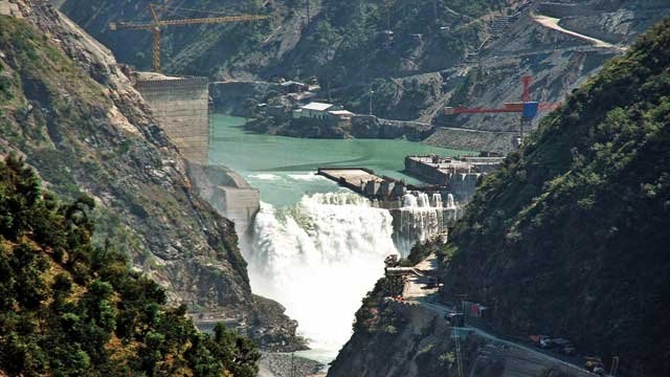 Pakistan has raised objections to the design of India’s Kiru hydroelectric plant, a mega 624 MW project over the Chenab river in Jammu and Kashmir, but New Delhi asserts that the project is fully compliant with the Indus Water Treaty, according to officials.

Saxena, however, asserted that the design of the project is fully compliant with the provisions of the Indus Waters Treaty (IWT). It has been certified by the Central Water Commission, an apex organisation of the country in the field of water resources.

This run-of-river project is being implemented by the Chenab Valley Power Projects Limited, a joint venture of the National Hydropower Company and Jammu and Kashmir State Power Development Corporation (JKSPDC).

“As a responsible upper riparian state, India is committed to full utilisation of its rights and believes in an amicable resolution the issues raised by Pakistan side in letter and spirit of the treaty.

“Pakistan’s objections on this project may come up for discussions in the next meeting of the Permanent Indus Commission scheduled this year in Pakistan. In the forthcoming meeting, the Indian side will explain its position and hope that Pakistan will appreciate the same and its apprehensions will be addressed through discussions,” Saxena said on Tuesday.

The treaty provides Pakistan the right to raise objection on Indian design within three month of the receipt of the information. India has supplied the information on this project in June to Pakistan.

Under the IWT signed between India and Pakistan in 1960, all the waters of the eastern rivers — Sutlej, Beas, and Ravi — amounting to around 33 million acre feet (MAF) annually is allocated to India for unrestricted use. The waters of western rivers — Indus, Jhelum, and Chenab — amounting to around 135 MAF annually has been assigned largely to Pakistan.

According to the treaty, India has been given the right to generate hydroelectricity through run-of-the-river projects on the western rivers subject to specific criteria for design and operation.

The treaty also gives right to Pakistan to raise objections to designs of Indian hydroelectric projects on the western rivers.

India is permitted to construct the run of the river plants on western rivers with limited storage as per criteria specified in the treaty, Saxena said.

Earlier this year, during the meeting between Indus Commissioner of India and Pakistan, Shah also raised objections on the designs of Pakal Dul and Lower Kalnai hydropower projects in Jammu and Kashmir. To this, India said the designs are fully compliant with the treaty.

Pakistan has also raised objections on hydropower projects in Chilling (24 MW), Rongdo (12 MW) and Ratan Nag (10.5 MW) are in Leh; while Mangdum Sangra (19 MW), Kargil Hunderman (25 MW) and Tamasha (12 MW) are in Kargil. India had said the designs of these projects are also fully compliant with the treaty.

Note: The lead image has been used only for representational purpose