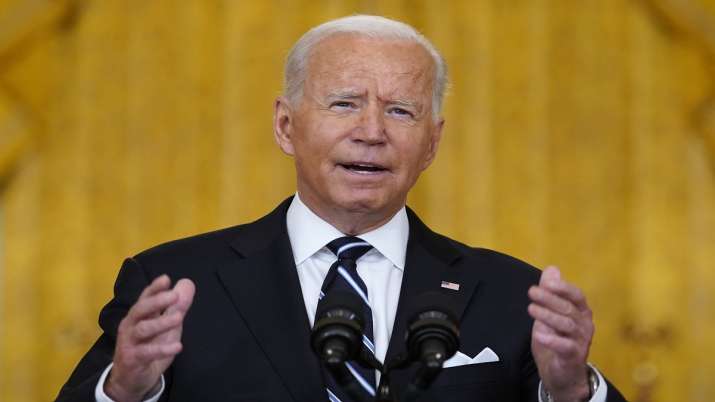 Facing a firestorm of criticism, President Joe Biden plans to speak Friday about the chaotic evacuation of Americans and allies from Afghanistan as the U.S. struggles with obstacles ranging from armed Taliban checkpoints to paperwork problems.

While Biden has previously blamed Afghans for the U.S. failure to get out more allies ahead of this month’s sudden Taliban takeover, U.S. officials told The Associated Press that American diplomats had formally urged weeks ago that the Biden administration ramp up evacuation efforts.

Tens of thousands of people remain to be evacuated ahead of the United States’ Aug. 31 deadline to withdraw its troops from the country, although the pace picked up overnight. A defense official said about 5,700 people, including about 250 Americans, were flown out of Kabul aboard 16 C-17 transport planes. On each of the previous two days, about 2,000 people were airlifted.

Biden is set to meet with his national security team about the evacuations, and to speak from the White House Friday afternoon. In addition to criticism from some lawmakers who say the U.S. failed to adequately plan for the Taliban’s swift takeover, U.S. diplomats have voiced dissent.

In July, more than 20 diplomats at the U.S. Embassy in Kabul registered their concerns that the evacuation of Afghans who had worked for America was not proceeding quickly enough.

In a cable sent through the State Department’s dissent channel, a time-honored method for foreign service officers to register opposition to administration policies, the diplomats said the situation on the ground was dire, that the Taliban would likely seize control of the capital within months of the Aug. 31 pullout, and urged the Biden administration to immediately begin a concerted evacuation effort. That’s according to officials familiar with the document who spoke on condition of anonymity to discuss the internal debate.

Biden has said that the chaos that unfolded as part of the withdrawal was inevitable as the nearly 20-year war came to an end. He said he was following the advice of Afghanistan’s U.S.-backed president, Ashraf Ghani, in not earlier expanding U.S. efforts to fly out translators and other Afghans in danger for the past work with Americans. Ghani fled the country last weekend as the Taliban seized the capital.

Biden also said that many at-risk Afghan allies had not wanted to leave the country. But refugee groups point to yearslong backlogs of applications from thousands of those Afghans for visas that would let them take refuge in the United States.

The administration has also portrayed its contingency planning as successful after the Afghan government fell much faster than publicly anticipated by administration officials. Yet the White House received clear warnings that the situation was deteriorating rapidly before the current evacuation push.

The Kabul airport has been the focus of intense international efforts to get out foreigners, Afghan allies and other Afghans most at risk of reprisal from the Taliban insurgents.

With the Taliban controlling the Afghan capital, including the airport’s outer perimeter, White House national security adviser Jake Sullivan said that U.S. citizens are able to reach the airport, but were often met by large crowds at the airport gates.

On Thursday, Taliban militants fired into the air to try to control the crowds gathered at the airport’s blast walls. Men, women and children fled. U.S. Navy fighter jets flew overhead, a standard military precaution but also a reminder to the Taliban that the U.S. has firepower to respond to a combat crisis.

Sullivan acknowledged that there is the possibility of a hostage situation or terrorist attack, even though the government has been in contact to assure safe passage for U.S. citizens. The administration has committed to ensuring that all Americans can leave, even if that means staying past the August deadline.

“This is a risky operation,” Sullivan told NBC News Thursday. “We can’t count on anything.”

There is no firm figure of the number of people — Americans, Afghans or others — who are in need of evacuation as the process is almost entirely self-selecting.

The State Department says that when it ordered its nonessential embassy staff to leave Kabul in April after Biden’s withdrawal announcement, fewer than 4,000 Americans had registered for security updates. The actual number, including dual U.S.-Afghan citizens along with family members, is likely much higher, with estimates ranging from 11,000 to 15,000. Refugee advocates estimate about 100,000 Afghan allies and family members also are appealing for seats on the U.S. airlift.

Compounding the uncertainty, the U.S. government has no way to track how many registered Americans may have left Afghanistan already. Some may have returned to the United States but others may have gone to third countries.

Although Afghanistan had been a hotspot for the coronavirus pandemic, the State Department said Thursday that evacuees are not required to get negative COVID-19 results.

Additional American troops continued to arrive at the airport to safeguard and run the U.S. part of the evacuation. As of Thursday there were about 5,200, including Marines who specialize in evacuation coordination and an Air Force unit that specializes in emergency airport operations. Biden has authorized a total deployment of about 6,000.

ALSO READ | US troops could stay longer in Afghan to evacuate Americans: Biden