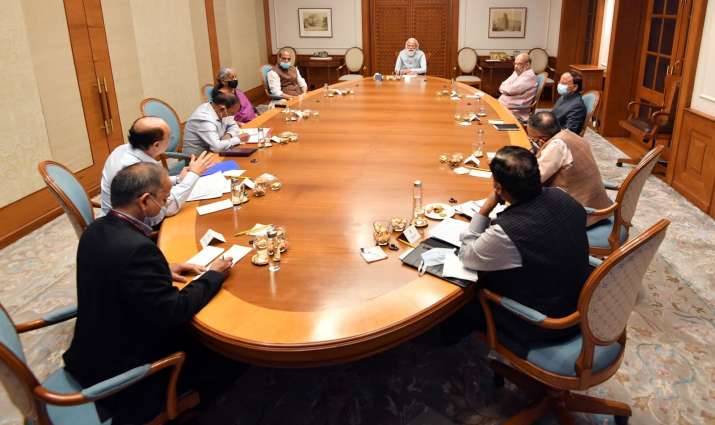 A high-level meeting is currently underway the Prime Minister’s Office (PMO) to discuss the details emerging out of Afghanistan, after Taliban took over the war-torn country.

According to sources, the prime minister has been in constant touch with officials regarding the ongoing situation. He was taking stock of situation till late night yesterday and was updated when the flight took off, sources told India TV. He instructed that adequate arrangements be made to ensure providing food for all those who returned at Jamnagar.

The Taliban seized power in Afghanistan just two weeks before the US was set to complete its troop withdrawal after a costly two-decade war. The insurgents stormed across the country, capturing all major cities in a matter of days, as Afghan security forces trained and equipped by the U.S.and its allies melted away.

Meanwhile, India on Tuesday rushed back home its ambassador and staff from the embassy in Kabul in a military transport aircraft in the wake of escalating tension, fear and uncertainty gripping the Afghan capital after its take over by the Taliban two days back. The C-17 Globemaster aircraft of the Indian Air Force carrying around 150 people, including diplomats, officials, security personnel and some stranded Indians, landed at the Hindon airbase near the national capital at around 5 PM after a brief halt at Jamnagar in Gujarat.

It is the second evacuation flight as another C-17 aircraft brought back around 40 people from the Hamid Karzai International (HKI) Airport in Kabul on Monday as part of India’s emergency evacuation mission that was carried out following coordination with relevant authorities including US officials handling security at the airport in the Afghan capital.

READ MORE: Over 600 panic-stricken Afghans cramped in a US military plane: A tell-all photo of Taliban’s fear