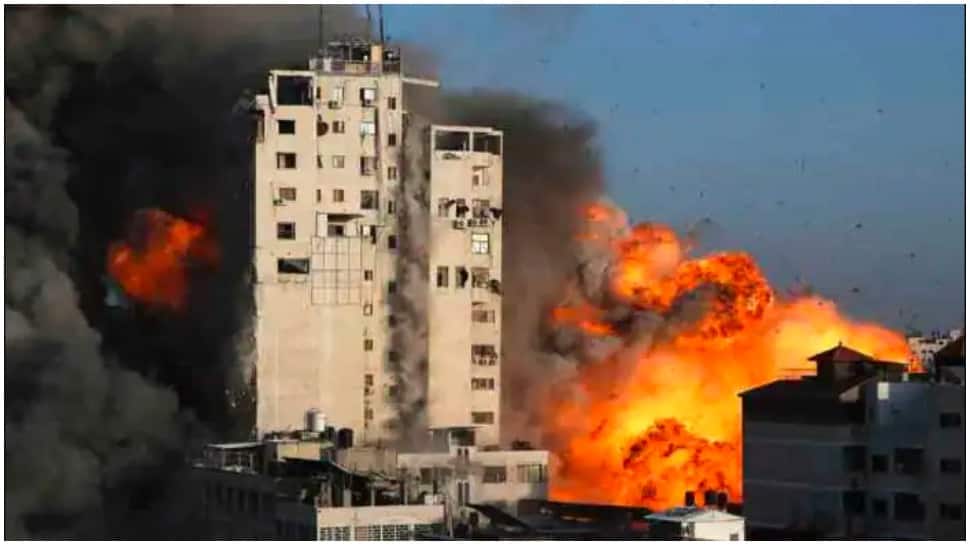 Suzy Ishkontana clings to her new toys and clothes, but mostly to her dad. For hours, they were separated under the rubble of their family’s home. Now she cannot bear to be apart. More than two months have passed since rescue workers pulled the 7-year-old from the ruins, her hair matted and dusty, her face bruised and swollen. The sole survivors of the family, she and her father heard the fading cries of her siblings buried nearby.

Suzy’s mother, her two brothers and two sisters — ages 9 to 2 — died in the May 16 Israeli attack on the densely packed al-Wahda Street in Gaza City. Israeli authorities say the bombs’ target was Hamas tunnels; 42 people died, including 16 women and 10 children.

Altogether, 66 children were killed in the fourth war on the Gaza Strip — most from precision-guided Israeli bombs, though in one incident Israel alleges a family was killed by Hamas rockets that fell short of their target. And then there are countless others, like Suzy, who bear the scars.

“My kids who died and my wife, they are now in a safe place and there is no worry about them, but my greater fear is for Suzy,” says her father, Riad Ishkontana.

With schools shuttered due to the war, the coronavirus and the summer hiatus, Gaza’s children have little to keep them occupied as they wade through the wreckage. Most are poor; more than half the population lived in poverty before the pandemic and war wiped out more jobs. Some of them are irritable, their parents say. Some wet themselves at night, are afraid to be alone, suffer from night terrors — all signs of trauma, says Dr. Yasser Abu Jamei, director general of the Gaza Community Mental Health Program.

But there is only one licensed child psychiatrist for Gaza’s 1 million children, who make up just under 48 percent of the population, Abu Jamei says. To recover, he says, children need to feel the traumatic event they’ve experienced is over and that life is returning to normal.

These children live in a place where the piercing whine of warplanes, the tremors of airstrikes and the humming buzz of armed drones are familiar sounds, even in times of cease-fire. Where when war erupts, there is no safe place — and where four wars and a blockade have crippled life over the past 13 years.

In the hours he and his daughter spent trapped in the rubble, Riad Ishkontana recalls hearing his older daughter Dana, 9, and youngest son Zain, 2, calling for him: ‘Baba, baba.’ Later, Suzy would tell him that she could feel Zain under the wreckage.

Before the war, Suzy was an independent child, walking to school down the street with Dana, and picking up fruits and vegetables from a corner store for her mom. Now, she struggles to speak with relatives or detach from the mobile phone, spending hours playing games, stopping to look at web pages related to the attack. “It’s almost like in losing her mom, she lost her life and her ability to deal with life and people,” Ishkontana says.

When Ishkontana leaves to go on any errand, Suzy weeps and insists on going along — she fears losing him, too. He took her to her mother’s grave; she brought along a hand-written note.
“Mama,” she wrote, “I want to see you.”

The blast blew the al-Masri family apart. And it left a young brother and sister shattered. It all happened in an instant, around 6 p.M. On May 10. The al-Masri family were harvesting wheat in an open field in Beit Hanoun by their house overlooking Gaza’s border with Israel. The children — cousins, siblings, the neighbor’s kids — played as the adults prepared to break their daylong fast in the Muslim holy month of Ramadan. As usual, Batool al-Masri carried her cousin Yazan, a toddler barely 2 years old. ?Twenty-four hours a day she was spoiling him,? says Batool’s father, Mohammed Atallah al-Masri.

It’s not clear whether the rocket was fired by Israel or Hamas. But in an instant, eight people were dead, including six children.

Yazan bled out in front of Batool. She tried to save him, ignoring injuries to her legs and pelvis. Batool’s 8-year-old brother, Qasim, was wounded in his head, as were other brothers, including 22-year-old Hammoudah, who lost an eye. Qasim survived, but his best friend and cousin, Marwan, 7, did not. They’d been inseparable, even in school, al-Masri says. Marwan’s only brother, Ibrahim, 11, also was killed. Also killed were Batool and Qasim’s sister Rahaf, 10 and their brother Ahmed, 21, who was just a week shy of his wedding.

The attack ‘completely changed’ Qasim, his father says. The young boy talks to himself. At night, he’s paralyzed by fear and does not get out of bed to use the bathroom.

Batool has become irritable, weeps often and in the evenings is terrified, waking every 20 or 30 minutes. She has little appetite. “What they saw was terrifying,” al-Masri said. “These were innocent kids.”

It was the first day of the Muslim holiday of Eid in May. Instead of playing with their new toys, the Abu Muawad children were running for their lives. The airstrikes hit without warning. Their mother — eight months pregnant — and the four children, ages 3 to 11, fled their home in northern Gaza just before it was destroyed. In the chaos, Maya Abu Muawad was separated from her mother. Alone and afraid, she rode in an ambulance to safer ground. For 15 minutes, she was locked in the wailing vehicle with a dying person and a wounded boy, her neighbor. It would be six hours before Maya would be reunited with her parents. Her younger brother, Oday Abu Muawad, 6, had never experienced war before. He was stunned by the scenes of chaos and death, the sound of airstrikes.

Before the war, Maya was confident and independent. She liked having her hair brushed, couldn’t stand it if her clothes became dirty and liked to wear rings. Now, the family is sheltering in a U.N.-run school with other displaced families. Maya repeatedly asks when they’ll return home, but her father Alaa Abu Muawad, who works as a driver, has no money to rebuild. She sits alone mostly, preferring to spend all her time on the phone, listening to songs or watching videos on TikTok — anything to escape her reality, says her father.

“If she asks her brother for something and doesn’t get it, she just cries and screams. Everything about her … It’s not my daughter before. It’s not Maya,” Abu Muawad says.

Before the war, Oday always smiled and loved to joke around with people. He preferred playing with older kids and sitting with adults, his father says. “Now, he watches kids playing on the television and asks: Why can’t we play like them,” Abu Muawad says. “I don’t know how to reply, what to tell him.”

And in the night, he often wakes up screaming.

When the 2014 war broke out, Lama Sihweil and her family fled their home in Beit Hanoun when the Israeli army invaded, joining some 3,300 Palestinians crammed into the U.N.-run Abu Hussein school in the Jabaliya refugee camp. As they slept, Israeli shells pounded the school and the street. Three of 7-year-old Lama’s cousins — ages 14, 16 and 26 — were among the 16 killed in that attack. The 2014 war claimed more than 2,100 Palestinian lives in Gaza. Seven years later, she is afflicted by memories: of screams in the darkness; of frantic searches of loved ones; of the stench of blood and debris.

“Just sitting with her, she appears fine,” says he father, Thaer Sihweil. “But try to talk to her, she can’t express herself. From the fear she has, she’s unable to communicate what’s in her heart,” he says.

After the war, her grades dropped. She would walk out of class without the teacher’s permission. She became forgetful. The fear and anxiety were constant. Then, war came again this year. Lama, her mother, siblings, aunts and cousins were sleeping over at her grandmother’s when more Israeli missiles hit. The walls of the house collapsed; the family ran screaming through the streets, stepping over shards of glass, twisted metal and electrical cables until they reached the nearest hospital. Now, Lama is afraid to venture out on her own. Each night, she clings to her parents. And there is no escape; Lama and her brothers would love to go the beach for a day, but the war cost their father his job. He does not have 40 shekels ($12) to get to Gaza’s coast.

When Youssef al-Madhoun hears the popping sound of firecrackers, or a metal door closing loudly, he is terrified. The war courses back. Youssef, his brother and his parents fled their home in the late afternoon on the last day of Ramadan, as the first rounds of Israeli fire sounded. They’d be safer, they thought, at his great-grandfather’s house in a more crowded neighborhood of Beit Lahia in northern Gaza Strip. By nightfall, the neighborhood was engulfed in a barrage. A family of six was crushed under the weight of a building just steps from where the al-Madhoun family was staying. Their house and others nearby partially collapsed or crumbled around them. An uncle and his wife were killed. The family fled again, to another grandparent’s home.

Before the war, Youssef exceled in school and talked of one day becoming a doctor. Now, said his father, Ahmed Awad Selim al-Madhoun, he’s afraid to sleep at night, afraid to step outside the house alone. He leaves the door open when he’s in the bathroom. This was the third war of Youssef’s short life. It’s left him feeling terrified, and unsafe.

Elien al-Madhoun was not yet born when her father lost his home in the 2014 Gaza War. Young as she is, she doesn’t entirely understand life and death.