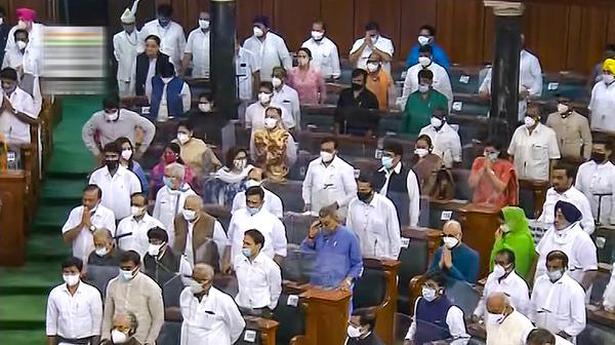 The monsoon session had a stormy start on Monday, with Prime Minister Narendra Modi unable to introduce his new Ministers, as is customary after the reshuffle, on the first day of Parliament, due to Opposition protest against fuel prices’ hike and farm laws.

Defence Minister Rajnath Singh said that in his 24-year career as a parliamentarian he had never witnessed such a disruption of the customary introduction of Ministers and Congress MP Manickam Tagore asserted that the BJP had done the same when Manmohan Singh, as Prime Minister, had sought to introduce his Ministers in the House.

As soon as the Lok Sabha convened and Mr. Modi rose to speak, Opposition members protested, carrying placards on fuel price hike and raising slogans demanding the repeal of the three controversial farm laws. Mr. Modi responded by pointing out the diversity in his new Council of Ministers and the ‘disrespect’ shown to them by Opposition members.

“I thought there would be an atmosphere of excitement in the House today, because women, Dalits, Adivasis have been made Ministers in large numbers… I would have been happy to introduce them,” he said. “It should make everyone proud that several women, several people belonging to the SC/ST community have taken oath as Ministers. Several new Ministers are children of farmers and also belong to OBC [Other Backward Classes] communities. It seems some people cannot digest more women, SC, ST, and OBC community members becoming Ministers,” he added.

Mr. Rajnath Singh spoke as the din did not die down. “Healthy traditions have been set by following conventions in Parliament. In my last 24 years of parliamentary life, I have not seen a single instance where the Prime Minister could not introduce his Council of Ministers, even if it’s one. It is sad, unfortunate and not a healthy trend,” he said.

The House was then adjourned till 2 p.m. and when the din did not subside, it was adjourned again till 3.30 p.m., when Minister for Information Technology, Ashwini Vaishnaw read out a statement on the allegations of snooping of journalists and other public figures made in several news sites nationally and internationally. After the statement, the House was adjourned for the day.

Mr. Tagore, while speaking to The Hindu outside Parliament, said the BJP was itself guilty of the behaviour that it was accusing the Congress of on Monday. “The BJP had also done the same to Dr. Manmohan Singh when he tried to introduce his Ministers to the House. The government is not ready for a discussion on issues raised by the Opposition and we, therefore, protested,” he observed.