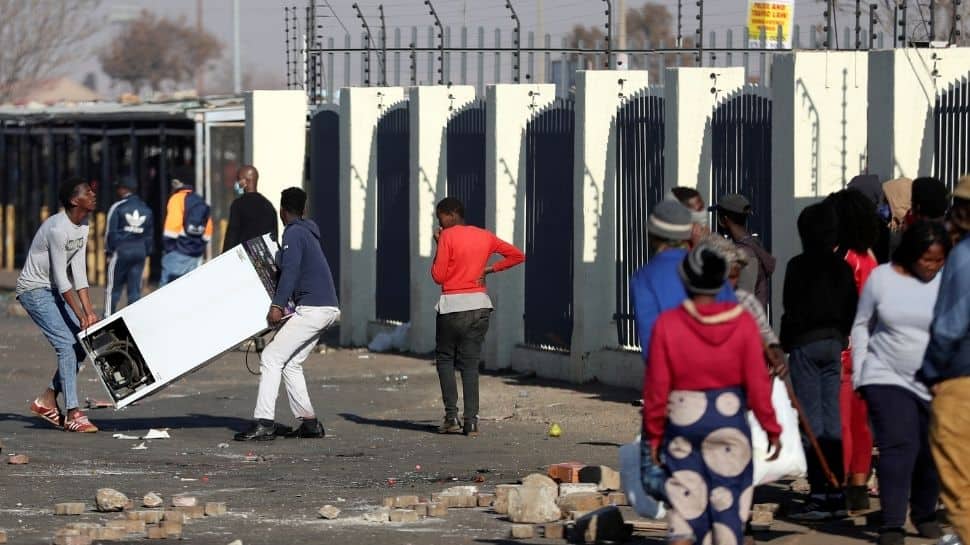 Rampant violence and looting has been taking place in major South African cities for the past three days. As he deployed troops to curb the violence, South African president Cyril Ramaphosa admitted that the deadly violence gripping the country is unprecedented post-apartheid era.  The violence has been prompted by the jailing of ex-president Jacob Zuma. Zuma, 79, was sentenced last month for defying a constitutional court order to give evidence at an inquiry investigating high-level corruption during his nine years in office until 2018.

Meanwhile, rioters looted shops and threw stones at police on Tuesday (July 13). The military prepared to send in 2,500 troops as outnumbered police seemed helpless to prevent attacks on businesses in Zuma’s home province KwaZulu-Natal and in Gauteng province, where the country’s biggest city, Johannesburg, is located.

At least 30 people have been killed in the unrest that broke out last week when Zuma handed himself over to authorities.

In a national address on Monday (July 12) evening, Ramaphosa said the army has been called in to assist and all leave of police personnel has been cancelled as all available resources and capabilities are mobilised to restore order. “As the Commander-in-Chief of the South African Defence Force, I have today authorised the deployment of Defence Force personnel in support of the operations of the South African Police Service. “The South African Police Service is putting measures in place to call up operational members from leave and rest-days to increase the presence of law enforcement personnel on the ground,” Ramaphosa said.

Describing the looting as “acts of public violence of a kind rarely seen in the history of our democracy,” Ramaphosa had a strong message to the thousands of looters who had stripped dozens of shopping centres bare in defiance of poorly resourced police services in KwaZulu-Natal and Gauteng provinces. “Let me be clear: we will take action to protect every person in this country against the threat of violence, intimidation, theft and looting. We will not hesitate to arrest and prosecute those who perpetrate these actions and will ensure that they face the full might of our law,” he said.

Zuma started a 15-month sentence last Wednesday after the country’s apex court found him guilty of contempt of court because he refused to return to the Commission of Inquiry into State Capture, where he has been repeatedly accused of involvement in corruption by witnesses. The violence has been condemned across the board by government, opposition parties and civil society organisations. They say that these looters are engaging in criminal action in the name of protests about the jailing of Zuma. “This moment has thrown into stark relief what we already knew: that the level of unemployment, poverty and inequality in our society is unsustainable.We cannot expect a lasting and durable peace if we do not create jobs and build a more just and equitable society in which all South Africans can participate freely and equally. We must therefore commit ourselves not only to peace, but to greater economic opportunity for all,” Ramaphosa said.