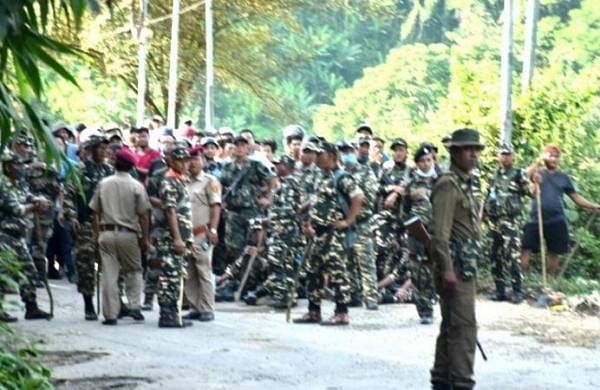 AIZAWL: A chief secretary-level talks will be held in Delhi on July 9 to defuse the prevailing tension along the Mizoram-Assam border, an official said on Friday.

Kolasib district deputy commissioner H. Lalthlangliana told PTI that chief secretaries of both the states will have bilateral talks over the inter-state border following the fresh tension that erupted on Tuesday at Aitlang hnar area in Kolasib district which borders Assam’s Hailakandi district.

The chief secretary-level meet will be held in the national capital on July 9, he said.

Meanwhile, Kolasib Superintendent of Police (SP) Vanlalfaka Ralte said that the situation along the Mizoram- Assam border is peaceful now.

He said that both the state forces are still camping at the disputed area on either side of the border.

“There was neither confrontation nor untoward incident at the inter-state border, where fresh tension erupted recently. There were no new activities from both the sides on Friday. The situation is peaceful now,” he told PTI.

He said that both parties were working hard to bring back normalcy in the border areas.

The northeastern state was part of Assam until 1972, when it was carved out as a Union Territory.

Mizoram became the 23rd state of India on 20 February 1987 following the historic Mizoram accord between the erstwhile underground Mizo National Front (MNF) and the Centre, which ended 20 years insurgency in the state.

The border dispute between the two neighbouring states is a long-standing issue that persisted for decades.

While the Mizoram government claimed that a 509 square- mile stretch of the inner-line reserve forest notified in 1875 under the Bengal Eastern Frontier Regulation of 1873 belongs to it, the Assam side agreed with the constitutional map and boundary drawn by survey of India in 1993.

After a massive tussle in 2018, the border row resurfaced in August last year and then in February this year.

However, the escalating tensions were successfully defused after a series of parleys with the intervention of the Centre.

Earlier on June 5, two abandoned houses along the Mizoram-Assam border were burned down by unidentified persons, fuelling tension along the volatile inter-state border.

Nearly a month after this incident, fresh border standoff cropped up on Tuesday with both trading charges of encroachment on each other lands.

Two makeshift camps erected by Mizoram police on the disputed area were damaged by Assam police during a confrontation on Thursday.

Officials of Assam’s Hailakhandi district administration has said razing of two camps constructed by Mizos and also a COVID-19 testing centre built by them was part of the efforts to foil Mizoram’s bid to capture its land on the border.