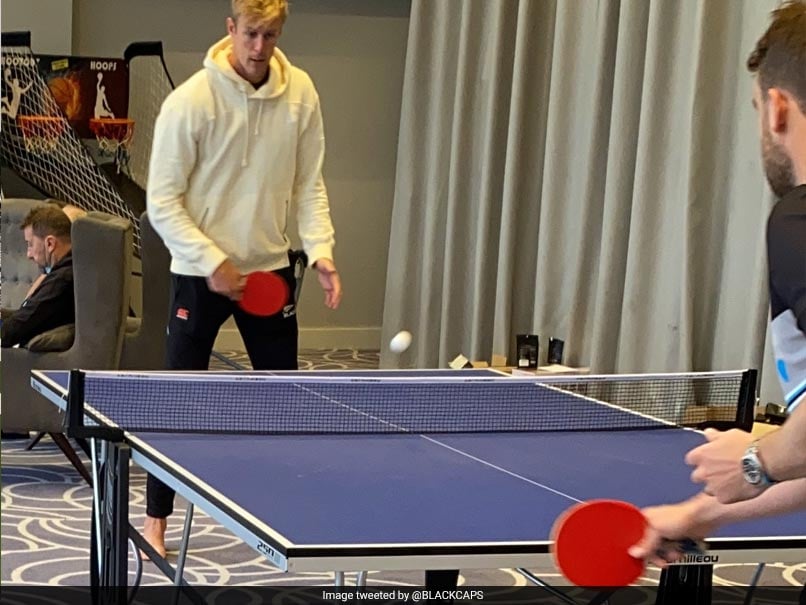 
The start of play on Day Four of the ongoing World Test Championship (WTC) final between India and New Zealand has been delayed due to rain here at the Ageas Bowl. New Zealand are at 101/2 with skipper Kane Williamson and senior batsman Ross Taylor on the crease. India got bowled out for 217 runs after the heroics of pacer Kyle Jamieson. To kill time, Kyle Jamieson was seen playing table tennis. “Wet weather has returned to the Hampshire Bowl so it’s table tennis for now,” tweeted BlackCaps.

Wet weather has returned to the Hampshire Bowl so it’s table tennis for now…#WTC21 pic.twitter.com/hA0AjPgiya

“It continues to drizzle and we have to state the obvious. Start of play on Day 4 has been delayed,” BCCI tweeted.

It continues to drizzle and we have to state the obvious.

Start of play on Day 4 has been delayed.#WTC21

Earlier, Devon Conway and Kane Williamson managed to frustrate the Indian bowlers and as a result, New Zealand came out on top on Day Three of the ongoing final on Sunday.

In the first innings, India was bundled out for 217 as Kyle Jamieson scalped five wickets. Ajinkya Rahane was the top scorer as he played a knock of 49 runs. Shubman Gill managed to score 28 runs in the first innings while Virat Kohli and Rohit Sharma scored 44 and 34 respectively.

Day 1 of the ongoing final was abandoned due to rain while Day 2 saw early stumps being called due to bad light. A call on using the Reserve Day will be taken on the fifth afternoon.