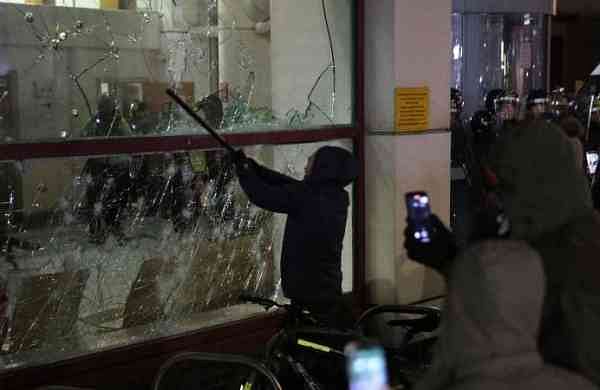 LONDON: Police in the south-west England city of Bristol said on Wednesday that 14 arrests have been made after around 200 demonstrators staged a second “Kill the Bill” anti-lockdown protest, just days after a similar protest had turned violent.

The local Avon and Somerset Police said the arrests were made for offences including breaches of the COVID-19 lockdown legislation and obstruction of a highway as officers attempted to engage with the protesters to disperse the crowds, as large gatherings remain banned in order to contain the spread of coronavirus.

Footage of the protest on Tuesday night showed crowds of people shouting, “our streets” and “shame on you” at lines of police some on horseback and others with dogs.

“After the scenes of violence witnessed in the city at the weekend it was necessary to bring in additional resources from our neighbouring forces to ensure the protest was safely brought to a swift conclusion,” said Chief Superintendent Claire Armes.

“Officers had engaged with protestors and asked them to disperse, but tents and a sound system were set up so it was abundantly clear they were intent on remaining at the location, in spite of legislation in place to protect public health,” she said.

She said that throughout the operation officers continued to urge protestors to move on and at no time were they contained, but eventually “enforcement was necessary” as gatherings remain banned.

“It’s disappointing that officers needed to take this action on a day we should be remembering all those who’ve lost their lives to COVID-19 over the past year. The communities of Bristol have made too many sacrifices and worked so hard to defeat this virus, it’s unacceptable for people to insult their efforts in this way,” Armes added.

The force said that highly trained public order officers from Avon and Somerset, British Transport Police, Devon and Cornwall, Dorset, Dyfed Powys, Gloucestershire, Gwent and Wiltshire were deployed to move protestors on in the night.

While many left the area, a significant number gathered on Deanery Road nearby and refused to disperse.

One of those arrested was in connection with the disorder in Bristol on Sunday, the force said.

The so-called “Kill the Bill” protesters have been demonstrating against the government’s Police, Crime, Sentencing and Courts Bill, which will see the police handed new powers to tackle demonstrations.

Over the weekend, the protests turned into violent clashes and saw a police station attacked, 21 officers injured and vehicles set alight.