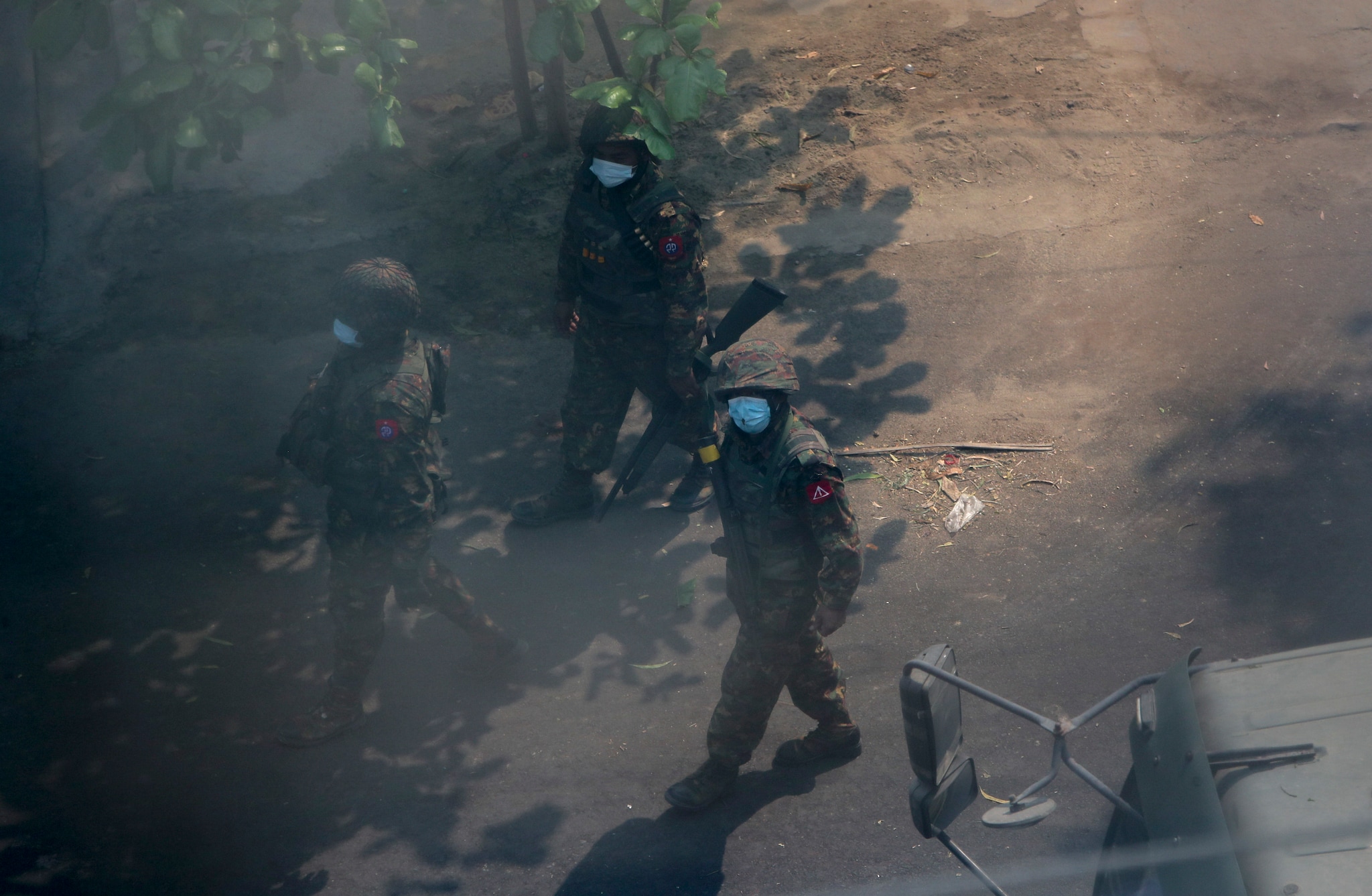 Hundreds of soldiers and police swooped on a railway station in Yangon on Wednesday seeking to arrest workers on strike to protest against the military coup in Myanmar.

The country has been in turmoil since the military ousted and detained civilian leader Aung San Suu Kyi last month, triggering daily protests around the country to demand the return of democracy.

Close to 2,000 people have been arrested and the death toll has climbed to more than 60.

Thousands of government workers across the country have been participating in a civil disobedience movement aimed at choking state institutions and paralysing the economy.

The movement has resulted in hospital disruptions, bank closures and empty ministry offices.

Hundreds of soldiers and police were deployed early Wednesday morning to Ma Hlwa Gone railway station and its staff housing compound, where about 800 workers were participating in strike action.

“Around 300 security personnel are blocking the road searching for the people who are involved in the civil disobedience movement,” a 32-year-old woman who lives at the site told AFP.

“I escaped, but there were many left, I am worried about the remaining workers. I just hope they don’t arrest the people, if they do it is troubling because they could beat and kill them.”

There was a heavy police presence in Yangon’s central San Chaung township on Wednesday following chaos two nights ago when security forces sealed off a block of streets, confining around 200 anti-coup protesters before searching apartments.

State media reported Wednesday the arrest of seven protesters for allegedly insulting religion by hanging pictures of a monk on female longyis or sarongs on Monday.

Protesters have been hanging longyis to play on security forces’ fears of Myanmar traditions that say women’s lower parts and garments that cover them can sap men’s power.

That followed another restless night in parts of Yangon Tuesday, with security forces setting fire to protesters’ makeshift barricades in Thingangyun township, according to a 26-year-old resident who accused authorities of trying to incite fear.

There were also tense scenes in the North Okkalapa area as about 100 protesters were arrested.

“Some of them were severely beaten, but the people are still continuing their protest,” a local rescue worker told AFP.

A live video stream showed people coughing and washing their faces after tear gas was deployed and there were reports of gunfire.

“A girl was wounded in her pelvic area by gunshot and she was taken to her home because the hospital is occupied by the security forces,” a rescue worker said.

The US and British embassies in Yangon said there were reports of innocent students and civilians being surrounded by security forces in North Okkalapa.

“We call on those security forces to withdraw from the area, release those detained, and allow people to depart safely,” the US embassy said on Twitter.

The coup and crackdown have triggered international condemnation, with growing demands for the generals to relinquish power and release political prisoners.

“I went… to meet the parents of hundreds of students and peaceful protesters arbitrary detained,” Christian Lechervy wrote on Facebook.

But not all countries are giving Myanmar the pariah treatment — the Sri Lankan government invited the junta’s appointed foreign minister to economic cooperation talks in early April.

The United Nations Security Council continued to look for consensus on Myanmar after Asian members on Tuesday rejected a declaration condemning the coup, which could have paved the way for international sanctions, diplomats said. Two versions drafted by Britain and seen by AFP were rejected by China, Vietnam, India and Russia.

Meanwhile, a lobbyist recruited to represent the junta internationally is set to pocket a $2 million fee, according to documents filed to the US Justice Department seen Wednesday by AFP.

Israeli-Canadian lobbyist Ari Ben-Menashe and his Montreal-based firm Dickens and Madson signed a contract with the regime on March 4.

Part of their remit is “to assist in explaining the real situation in the country”, while lobbying to get sanctions lifted.

The military has sought to stem the flow of news of its crackdown, throttling the country’s internet every night and stepping up pressure on independent media.

Reporters Without Borders condemned the ongoing media crackdown and characterised the raids on local media as “a shocking act of intimidation”.

It said at least 28 journalists had been arrested since the coup and about 11 were still in custody including an Associated Press photographer.

Myanmar’s ambassador to Britain was recalled on Tuesday after he urged the junta to release Suu Kyi and President Win Myint, state media reported Wednesday.