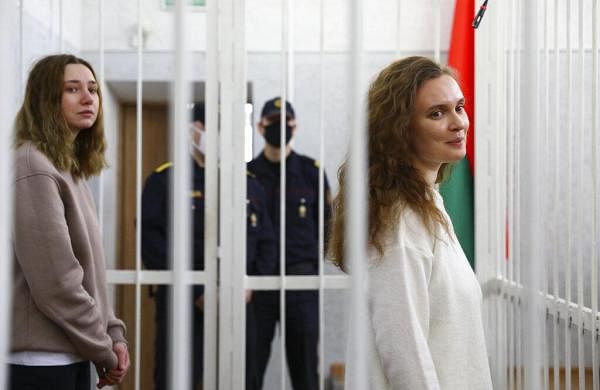 KYIV:  A court in Belarus on Thursday sent two female journalists to prison on charges of violating public order after they covered a protest against the nation’s authoritarian president.

The court in the Belarusian capital of Minsk handed two-year sentences to Katsiaryna Bakhvalava, 27, who goes by the name Andreyeva, and Daria Chultsova, 23 of the Polish-funded Belsat TV channel. They were arrested in November when police broke down the door of an apartment in Minsk from which they were doing a live stream of a protest and charged them with “organizing actions rudely violating public order,” accusations they have denied.

The U.S. Embassy in Belarus has called for their release and urged Belarusian authorities to stop prosecuting journalists for doing their jobs.

Addressing the court before the verdict, Bakhvalava vowed to continue working for “building a Belarus that won’t have political repressions.”

“I’m not pleading. I’m demanding acquittal for me and my colleagues,” she said in a reference to other Belarusian journalists who have been put into custody.

There have been more than 400 detentions of journalists in Belarus over the last six months. At least 10 of them have faced criminal charges and remain in custody.

“We consider the sentence politically motivated, its’ goal is to scare all journalists to prevent them from fulfilling their professional duty to cover socially important events in the country,” the Belarusian Association of Journalists said. “That effectively amounts to a professional ban.”

Belarus has been rocked by protests after official results from the Aug. 9 presidential election handed President Alexander Lukashenko a sixth term in office by a landslide. The opposition and some poll workers have said the election was rigged.

Authorities in the Eastern European nation have responded with a sweeping crackdown on the demonstrations, the biggest of which attracted up to 200,000 people. According to human rights advocates, more than 30,000 people have been detained since the protests began, and thousands were brutally beaten.

The United States and the European Union have responded to the Belarus election and the crackdown by introducing sanctions against Belarusian officials.