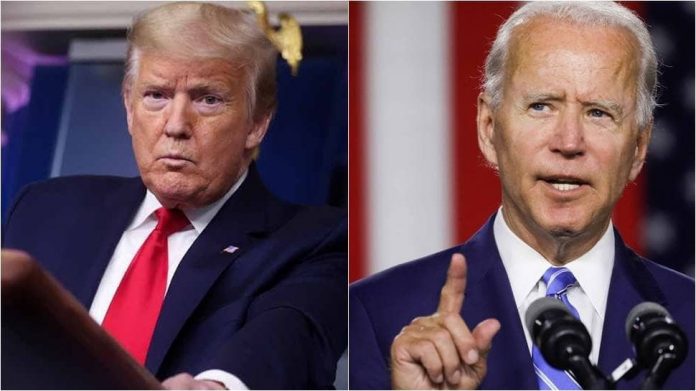 Ahead of US Presidential elections on November 3, both Trump and Biden campaigns insist voters to “Get out to Vote”.

Washington: Be it the Trump or the rival Biden campaign, “Get out to Vote” is the common theme driving all the rallies and meetings for the November 3 US presidential elections.

President Donald Trump, a Republican who is seeking a second term, and his Democratic rival and former vice president Joe Biden make it a point in their public remarks to emphasise to their supporters how important it is for them to go out and vote next Tuesday.

“Whatever you do, you have to go out and vote,” Trump said at an election rally in the Bullhead City of Arizona on Wednesday.

With just days to go for the polls and in a scenario where every vote counts, Trump even asks his supporters to take their bosses, friends and neighbours to the polling booths to vote.

Get out and vote,  Trump, 74, told his cheering supporters at Tampa, Florida on Thursday.

First Lady Melania Trump too, in her maiden election speech in Pennsylvania this week, appealed to the voters to go out and vote.

“If you haven’t already voted, please be sure to get out and vote on November 3 and encourage everyone you know to do the same,” she said.

Former vice president Biden, 77, too has been making the same appeal to his voters.

“Go out and Vote,” he says in his public meetings, which because of coronavirus has been restricted to a few people or drive-in car rallies.

Over 81 million out of nearly 240 million eligible voters have already cast their ballots, taking advantage of the early voting facility in view of the raging COVID-19 pandemic.

The Biden Campaign has been spending a significant amount of resources and has deployed hundreds of people, who are writing emails and making phone calls to people appealing them to go out and vote.

“History shows that the easiest way to make sure that you and your friends vote is to make a plan. And when it comes to voting this year, having a plan has never been more important,” former president Barack Obama said in a recent video to his supporters.

In the several public rallies that he has addressed so far, including the battleground States of Pennsylvania and Florida, Obama makes it a point to underscore the importance of going out and voting.

On Wednesday, the Biden Campaign held a special event involving American celebrity Oprah Winfrey, during which they urged people to get out and vote, if they want to make the change.

“Please vote. Get out to vote. Visit Iwillvote.Com/PA. Return your ballot as soon as possible. And make sure everyone you know does,” Biden said at an election rally in Pennsylvania.

“I’m urging the American people, go out and vote. Show up. If you can vote early, vote early. Vote whatever way is most convenient for you, but vote,” Biden said at a recent election rally, “If you (don’t) show up in large enough numbers, nothing is going to change,” Biden said.

“The president cast his vote this weekend. Karen and I cast our votes in Indianapolis. So I need you to go get it done. If you’ve already requested an absentee ballot you can vote absentee in person. Right And I checked on the way here, if you don’t know where to go with it you can head down to the Polk County Election Office. 120 Second Avenue,” Pence said at an election rally in Des Moines, Iowa.

There have been independent efforts as well from various groups, who believe that it is important for Americans to exercise their right to franchise to make a difference. Non-profit body Vote Forward, this year through volunteers wrote more than 15 million letters to fellow Americans urging them to vote.

“It’s one of the biggest tactics in our unusual year where it’s no longer possible to knock on people’s doors,” Scott Forman, who launched the campaign told The Daily Beast.

In his election rallies, Obama goes out in detail on voting.

“We will never come close to seeing what it would be like if everybody voted. When I hear people say, ‘Well I don’t know voting doesn’t make a difference.’ We don’t know because usually no more than half the people who could be voting, vote. We get 50-55 per cent of people voting, and then people say, ‘Well looking–you know, not enough change happened.’ Well, imagine if 60 per cent voted. What about 70 per cent,” Obama said.

“Millions of Americans are already voting. Millions more are going to vote by the end of this week and I believe when you use your power, the power to vote you’re going to change the course of this country for generations to come at home,” Biden said at an election rally in Florida on Thursday.