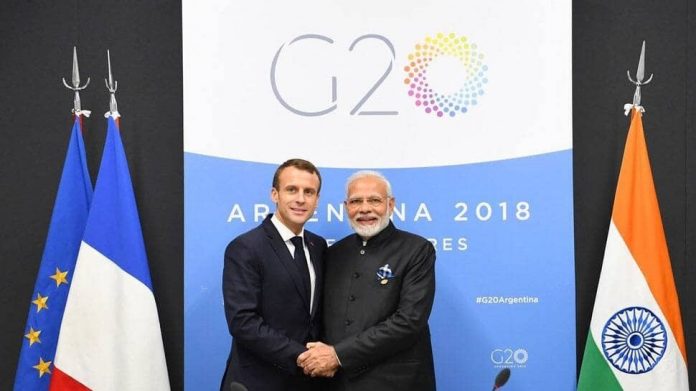 Condemning the terror attacks in France, PM Modi on October 29 tweeted, “Our deepest and heartfelt condolences to the families of the victims and the people of France.”

New Delhi: Even as France and French President Emmanuel Macron faced a barrage of negative comments from countries like Turkey, Pakistan, India stood by Paris, against terrorism, four times in the last two days. France has been reeling under brutal terrorist attacks since the beginning of October and India is the first “Non-Western” country to support Macron publicly. So far, Italy, Germany, Canada, Netherlands have come in full public support for the French leader.

Prime Minister Narendra Modi on October 29 (Thursday) condemned the terror attacks in France. He tweeted, “I strongly condemn the recent terrorist attacks in France, including today’s heinous attack in Nice inside a church. Our deepest and heartfelt condolences to the families of the victims and the people of France. India stands with France in the fight against terrorism.”

France witnessed two knife attacks on Thursday, one in Nice in which three people were killed at a church, and another in Avignon, in which the attacker was killed. Internationally, a guard at the French consulate at the Saudi city of Jeddah was attacked.

Meanwhile, Foreign Secretary Harsh Shringla is on a weeklong European tour, with his visit starting from Paris. During his meeting with a diplomatic advisor to French President Macron–Emmanuel Bonne, the foreign secretary extended Indian government’s condolences on the terror attack in France and conveyed PM Modi’s message that India stands with France in the fight against terrorism. He also reiterated the support during his address at a French Think Tank– Institut Français des Relations Internationales (IFRI).

Shringla said, “It was horrifying to hear about the two recent terrorist incidents in France, one of which, as is very often the case, had its origins in our western neighbourhood – Pakistan. For the past three decades, we have experienced what unbridled radicalism can wreak – and what malevolent violent forces it can unleash.”

The first public support came on Wednesday evening in a statement by the Ministry of External Affairs. In a statement extending Delhi’s backing of Paris, MEA said, “We strongly deplore the personal attacks in unacceptable language on President Emmanuel Macron in violation of the most basic standards of international discourse.”

Remember Turkish President has been making personal remarks on Macron, including saying he needs “mental treatment”.

India also condemned the “brutal terrorist attack that took the life of a French teacher in a gruesome manner that has shocked the world. We offer our condolences to his family and the people of France. There is no justification for terrorism for any reason or under any circumstance”.

The current focus on extremism in France started in the country after a 47-year-old French teacher Samuel Paty was beheaded in a knife attack. After the incident the French president said, his country will stand by its secular values.

Interestingly, while the Centre has backed the French govt, it is the virtual world that also saw a lot of support. #IstandWithFrance has been trending on India twitter, something French outlets have said started from India and then took to other parts of the virtual world.