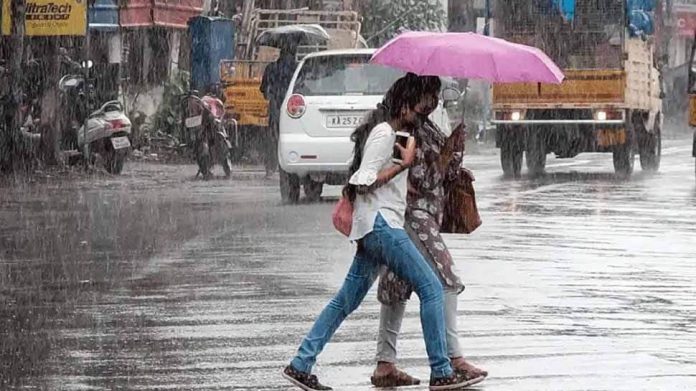 An intense spell of rain accompanied with lightning and thunder lashed over large parts of Chennai on Thursday.

Chennai: The onset of the North-East monsoon was marked by heavy rains, interspersed with lightning and thunder over large parts of Chennai starting from the wee hours of Thursday. Much of the city’s arterial roads and lanes remained water logged, owing to the intense spell in a short span. Some estimates say that this is the highest rainfall that the city has received in a 24 hours span since November 2017.

Calculations by private weather bloggers say that Chennai city alone received between 150-200mm rainfall within a few hours. Pictures showed that even the sands on the famed marina beach were water logged, said to be a first since 2017.

“Bands seen wreaking at noon. North Chennai getting good rains with Encore getting 55m after 8:30am. Isolated spells can happen here and there till evening/night. Worst is over for the amazing onset spell” Pradeep John, popularly known as Chennai Weatherman had tweeted.

According to the Regional Meteorological Department, a cyclonic circulation situated between Northern Tamil Nadu coast and South Andhra Pradesh Coast has brought in heavy to very heavy rainfall in parts of Tamil Nadu and Puducherry.

He had also said that heavy rain was likely over the next 24 hours across Chennai and adjoining districts of Kanchipuram, Tiruvallur, besides other districts such as Ranipet, Villupuram, and southern districts of Tirunelveli, Tenkasi, Tuticorin and Ramanathapuram.