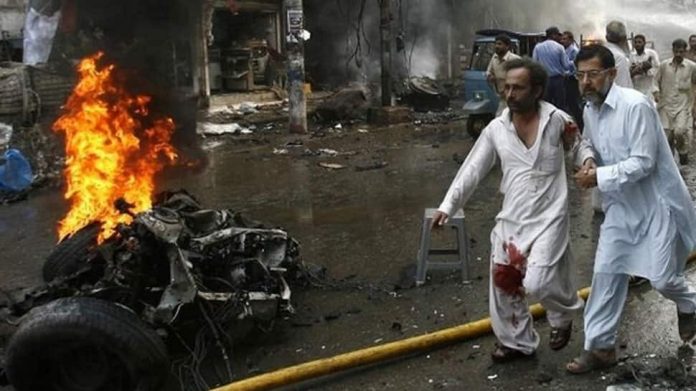 At least 7 people were killed and over 70 others, mostly children, were injured after a massive explosion rocked Pakistan’s Peshawar on Tuesday. The blast was reported at the Dir Colony, according to Geo News.

ISLAMABAD: At least 7 people were killed and over 70 others, mostly children, were injured after a massive explosion rocked Pakistan’s Peshawar on Tuesday. The blast was reported at the Dir Colony, according to Geo News.

Geo News reported quoting Khyber Pakhtunkhwa Police chief Dr Sanaullah Abbasi and other police officials that at least 7 people have been killed and over 50 injured in a blast inside a seminary in Peshawar’s Dir Colony.

Children and their instructors are among the victims as the blast took place when the classes were underway at the religious school. According to Rescue 1122, the injured have been shifted to Lady Reading Hospital and another medical facility where the condition of several of them is stated to be critical.

The doctors said that more casualties are feared as some of the wounded children are in critical condition.

Meanwhile, the police and rescue teams have reached the crime scene and launched the rescue operation. It will be premature to say anything about the nature of the blast, the police officials said.

The local police officers are also trying to identify the nature of the explosion.

No group has claimed responsibility for the attack.

“Most of those killed and injured were hit by the ball bearings and some were badly burnt,” hospital official Muhammad Asim Khan said. All of the dead were men aged between 20 and 40, he said.

Prime Minister Imran Khan has strongly condemned the incident and prayed for the speedy recovery of the injured. Condemning the incident, KP Minister Shaukat Yousufzai said Chief Minister Mahmood Khan had summoned a meeting to discuss the security situation. He revealed that Quetta and Peshawar were on threat alert following which security had been heightened.

Terming it a “heartbreaking incident”, Pakistan Muslim League-Nawaz (PML-N) vice-president Maryam Nawaz condoled with the victims and their families.