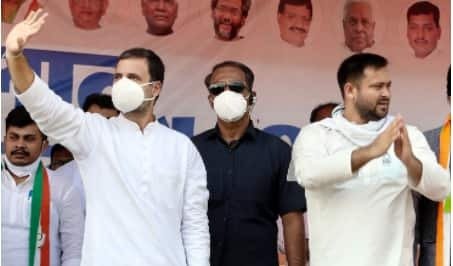 Rahul Gandhi questioned the Prime Minister`s statement of bowing his head in front of the sons of Bihar who had made the supreme sacrifice in Galwan Valley clash, and said the PM insulted the Army by lying about the Chinese intrusion.

The Congress leader said, “Don`t lie to Biharis, Modi Ji. Did you give jobs to Biharis? Last elections, PM promised 2 crores jobs, no one got them. In public, he says I bow my head to Army, farmers, labourers and traders. But once he reaches home, he only works for Ambani & Adani.”

Addressing the first joint rally `Badlav Sankalp` at Hisua in Nawada, the Wayanad MP questioned the Prime Minister`s statement of bowing his head in front of the sons of Bihar who had made the supreme sacrifice in Galwan Valley clash, and said the PM insulted the Army by lying about the Chinese intrusion.

He also raised the questions of problems being faced by farmers, small traders, lack of jobs, demonetisation, among other issues.

Continuing his attack on the Prime Minister, who had earlier today spoken at a rally in Sasaram, Gandhi said, “The question is that when the Chinese Army martyred 20 of our soldiers and took over 1200 square kilometres of our land. then why did the Prime Minister insulted our braves and said no one came inside India ?”

Earlier, RJD leader Tejashwi Yadav had targeted the Bihar Chief Minister Nitish Kumar over the various issues plaguing the state. He said, “CM says Bihar is a landlocked state so factories can`t be established in absence of sea. Nitish Ji, you`re tired now and can`t handle Bihar. Punjab, Rajasthan & Haryana are also landlocked states, yet our people go there to work as they have factories.”

The RJD leader said, “If I become CM, then in my first cabinet meet I`ll sign on order giving 10 lakhs government jobs to Bihar youth. PM is most welcome in Bihar but he should have given answers about special status to Bihar, absence of factories, unemployment and other state issues.”

A day after the BJP promised 19 lakh jobs and free Covid vaccine in its manifesto for Bihar polls, former Finance Minister P Chidambaram said in a tweet: “After mocking the RJD for promising to create 10 lakh jobs, the NDA has promised to create 19 lakh jobs in Bihar if elected.”

“I did not know that 19 was a smaller number than 10. I think I should go back to primary school,” he mocked the BJP.

On Thursday, Rahul Gandhi hit out at the BJP on the free vaccine promise. He said this was an election gimmick and added to the false promises made by the BJP.

Releasing the BJP manifesto on Thursday, Union Finance Minister Nirmala Sitharaman said, “As soon as a Covid-19 vaccine is available for production at a mass scale, every person in Bihar will get free vaccination. This is the first promise mentioned in our poll manifesto.”

The BJP has evolved a five-point formula for the development of the state, which includes a healthy society, self-dependent Bihar, educated Bihar, strong industry and strong agriculture with financially sound farmers and healthy rural-urban development.