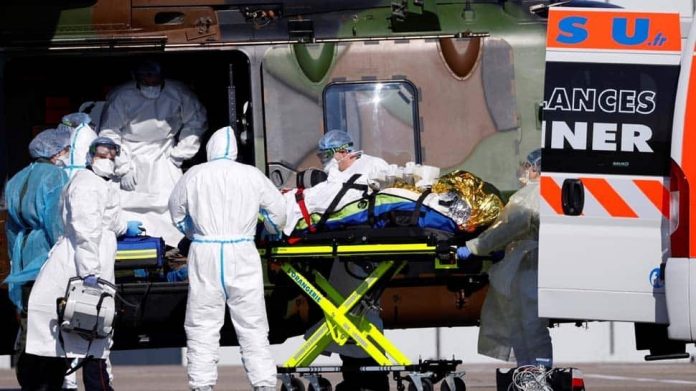 PARIS: France reported on Wednesday a second daily record of new COVID-19 infections in five days, with almost 19,000 additional cases over 24 hours, while hospitalisations for the disease stood at a three-month high. French health authorities said there were 18,746 extra cases, versus a previous record on Oct. 3 of 16,972 and also sharply up from Tuesday`s tally of 10,489.

The total number of cases since the start of the pandemic in March now stands at 653,509, the world`s 10th highest. French President Emmanuel Macron flagged new restrictions to contain the pandemic, which come on top of measures already put in place by the government, such as bars being ordered to close at 10 pm in major cities including Paris.

“In places where the disease is circulating too quickly … there will be new restrictions,” Macron said during an interview aired on France`s two main television channels. French Health Minister Olivier Veran, along with Finance Minister Bruno Le Maire, will hold a COVID-19 press conference on Thursday at 1600 GMT.

French health authorities said more than 7,500 patients were currently being treated in hospital for COVID-19, marking a three-month high and an increase of more than 65% from a low point of 4,530 reached on Aug. 29. Fears of the hospital system being overwhelmed led the government to impose one of Europe`s strictest lockdowns between March 17 and May 11.