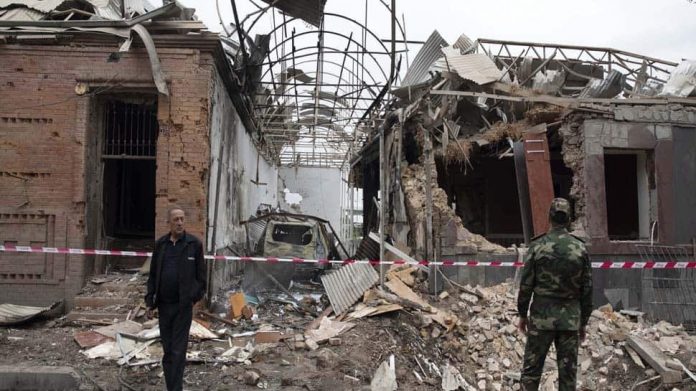 The Kremlin issued a new appeal for an end to hostilities in and around Nagorno-Karabakh on Tuesday after Moscow`s foreign intelligence chief said the mountain enclave could become a launch pad for Islamist militants to enter Russia.

The Kremlin issued a new appeal for an end to hostilities in and around Nagorno-Karabakh on Tuesday after Moscow`s foreign intelligence chief said the mountain enclave could become a launch pad for Islamist militants to enter Russia.

Moscow expressed alarm after the deadliest fighting in more than 25 years between ethnic Armenian and Azeri forces entered a 10th day, though the French news agency AFP later said Armenia had offered concessions only if Azerbaijan was ready to do so.

AFP gave no details of the offer it said had been made by Prime Minister Nikol Pashinyan. Azerbaijan has said it will stop fighting only if Armenia sets a timetable to withdraw from Nagorno-Karabakh, which under international law belongs to Azerbaijan but is populated and governed by ethnic Armenians.

Sergei Naryshkin, the head of Russia`s SVR Foreign Intelligence Service, said the conflict was attracting people he described as mercenaries and terrorists from the Middle East.

“We are talking about hundreds and already even thousands of radicals hoping to earn money in a new Karabakh war,” Naryshkin said in a statement.

He warned that the South Caucasus region could become “a new launch pad for international terrorist organisations” from where militants could enter states including Russia.

His comments were released after Turkish Foreign Minister Mevlut Cavusoglu, whose country is a close ally of Azerbaijan, urged Moscow to be more active in peacemaking.

Mediation efforts led by Russia, France and the United States have failed to prevent intermittent flare-ups of fighting in Nagorno-Karabakh despite a ceasefire which ended a 1991-94 war that killed about 30,000.

Renewed fighting since Sept. 27 has increased concern that Turkey and Russia, which has a defence pact with Armenia, could be sucked into the South Caucasus conflict.

Iran, which borders Azerbaijan and Armenia, is also worried about the conflict and President Hassan Rouhani underlined the importance of peace in the region in a phone call with Azeri leader Ilham Aliyev on Tuesday.

In the latest fighting, Armenia said Azerbaijan launched an attack with tanks and artillery on a southern part of the contact line that divides ethnic Armenian and Azeri forces.

Nagorno-Karabakh said four cluster bombs had exploded in the centre of Stepanakert, its main administrative centre.

Azerbaijan says Azeri cities outside the conflict zone have been struck, taking the fighting closer to territory from which pipelines carry Azeri gas and oil to Europe.

Both sides say the other has hit civilian areas. Each denies targeting civilians.

Nagorno-Karabakh said 244 of its servicemen and 19 civilians had been killed since Sept. 27 and many more wounded.

The Azeri prosecutor`s office said 27 Azeri civilians had been killed in the renewed fighting. Azerbaijan has not disclosed information about its military casualties.

In an interview with Russian news agency RIA, Syrian leader Bashar al-Assad said Turkish President Tayyip Erdogan was “the main instigator and the initiator of the recent conflict in Nagorno-Karabakh between Azerbaijan and Armenia”.

Reiterating accusations first levelled by French President Emmanuel Macron that Turkey has sent Syrian jihadists to fight in the conflict, Assad said: “Damascus can confirm this.”

Assad offered no evidence for his allegation against Turkey, which backs rebels trying to oust him in Syria`s civil war.

Ankara did not immediately respond but has described similar accusations as part of attempts by Armenia to create “dark propaganda” about Turkey.